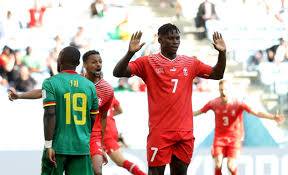 Cameroon got off to a poor start at the FIFA World Cup in Qatar with a defeat to Switzerland in their group opening game on Thursday.

The Swiss had come to the match hoping to advance out of the group for the third straight World Cup. While the Indomitable Lions are back in the tournament after missing the 2018 edition. Obviously the Swiss got off to a perfect start and with good performance from veteran Xherdan Shagiri who made beautiful runs with nice passes, especially in the first half.

Appearing in his fourth World Cup, he was outstanding despite both teams being unable to find the back of the net in the first half. Cameroon lacked cohesion and direct progressive play in the attack, with most of the long passes to the wingers lacking perfect crosses to the box coupled with poor finishing.

For the Swiss they had the pace but played a little cautious in the first half, obviously in midfield where they struggled to dominate play. The half ended with either side scoring.

On resumption of the second half, the Swiss improved in ball possession and knocked the ball more purposefully, creating space and took advantage of the left wing back of the Cameroonians. The effort paid off as Embolo scored the only goal in the 48 minutes.

Cameroon didn’t show signs to improve from their poor results of eight consecutive defeats in the World Cup. They lacked precision in attack with wrong positioning by their strikers. The crosses weren’t coming to the box, despite goalkeeper Andre Onana’s persistent effort to join the midfield with good long balls to the winger and upfront men.

The default of the back four was consistently observed with three defenders most times standing behind the goalkeeper. An average pundit could say that’s not how it is supposed to work!

The Cameroonian much later tried to start an attack but was not clear what to do. They were underwhelming in the later stages of the second stanza, lacking the bit to create against a lower defensive block which the Swiss weren’t fantastic in defense either. Onana had a greater percentage of touches against Switzerland, obviously the most of any goalkeeper in the World Cup this year.

The match ended with the slim score which Cameroon will battle mighty Brazil in their next group game and they could be heading to equal Mexico’s poor record of nine defeats in a row in the tournament history. If they do not up their game!

For Switzerland, the win is really important and it would stand a boost ahead of their best chance to qualify from group, despite some lapses. Although they face Serbia in the next match and will be hoping to extend their six games unbeaten in opening games at the World Cup.