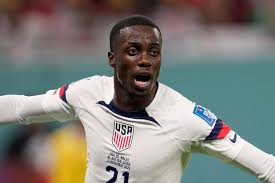 Tim who was born in Brooklyn 22 years ago opted to represent his birth country USA at the World Cup in Qatar, obviously this has not separated his love for his ancestral country and communication with his father.

“I communicate with him by WhatsApp, Weah told Fox Sports “If he’s busy, he doesn’t answer, just like if I’m busy, I don’t answer. My dad is the most normal person you could ever meet. He gets up and goes to play basketball or soccer.”

His father was a Ballon d’Or winner in 1995, obviously the best footballer in the world representing Liberia and plying his trade in Italy with AC Milan.

The Africa descendant scored his first World Cup goal with the opener in the 36 minute against Wales, a long dream of his father. “Everyone will be happy living a dream through me.” Weah said.

Meanwhile, Garteh Bale went on to equalize at the twilight of the game with a 82 minute strike to end the match 1-1.

While the US will be playing the next match with the quest to win and brighten their chances of advancing from the Group stage, Tim Weah obviously will work to keep his different nationalities of Liberia, French, Jamaica and the USA happy with more goals. Tim, the young African descendant ply his trade with French club Lille of France.