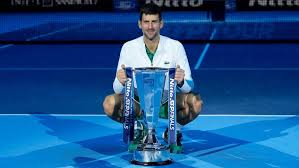 Serbian Novak Djokovic made a remarkable achievement on his milestone ambition as he won the Nitto ATP Finals singles title for a record –tying time over the weekend in Turin, Italy.

The former World No.1 now ranked 8thmade history as the oldest Nitto ATP Finals singles champion in 53 years history of the year-end tournament, after defeating World N.4  Casper Ruud of Norway, 7-5,6-3, in an hour and 32 minutes.

Djokovic who is a 21-time major champion closed out the title victory with his ninth ace and 31st winner overall. The 35 year-old who rewarded his season sterling performance with the Turin title, obviously a remarkable year that saw him win four ATP Tour titles- namely Rome, Wimbledon, Tel Aviv and Astana- all despite missing the Australian Open and the US Open as well as several North American tournament for his refusal to be vaccinated against Covid-19.

His achievement shattered the age long record to tying Roger Federer’s record achieved in 2011 in London at the age of 30. Djokovic achieved his over the Swiss tennis star at the age of 35, the oldest Nitto ATP Finals champion.

The crowd at the Pala Alpitour was amazingly delighted in appreciation for both Djokovic and Ruud in the final act of the 2022 ATP Tour season. The outstanding performance earned him more than $ 4.7 million in prize money as well as 1,500 Pepperstone ATP Rankings points.

The compensation is a relief without hesitation for award a record-setting, obviously he showed glimpses of the ocean depth with happiness as he shared hugs wife his wife and children as well as his coach Goran Ivanisevic and the rest of his team. He will finish the season ranked fifth.

Meanwhile, after the match at the post –match interview, the Serbian was of the opinion that matches of this nature usually end with very small margin, “One break of serve was enough in both sets. I knew Casper was playing really well coming into this match.

He further said, “We both served really well and I think in some decisive moments, like the 12th game of the first set, I managed to put a few returns back in play.

YouThe Serbian will go on in history as the oldest Nitto ATP champions and close out the season with a 21-time major champion.