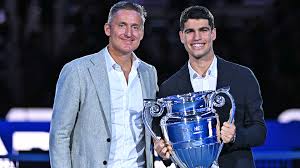 US Open Champion Carlos Alcarac is set to become the youngest year-end No.1 in history of men’s tennis following Rafael Nadal’s knock out at the ATP Finals in Turin, Italy.

Alcarac who opted out of the Turin ATP Finals due abdominal injury which he sustained at the Paris Masters earlier this month will surpass Lieyton Hewitt’s record of ending the year as the World No.1 aged 20 years and 275 days in 2001. Carlos is 19 years and 214 days as at the time of putting this report. This makes him the youngest year –end No.1!

With Nadal early exit from the tournament in Turin, it takes the young star to a new blistering height having won the US Open in New York coupled with totaling five ATP titles to end a sensational year.  The space for the world No.1 was open with most pundits predicting that it could go either but obviously Nadal was at advantage if he had won the Turin tournament or advanced further in the competition.

He shockingly lost 6-3 6-4 to Auger-Aliassime whom he defeated in September at the IS Open, though it is believed Nadal will need some games to gradually hit back form.

“I don’t think I forgot how to play tennis, how to be strong enough mentally,” Nadal told reporters on Tuesday, according to CNN.

Nadal further said, “I just need to recover all these positive feelings and all this confidence and all this strong mentally that I need to be at the level that I want to be.

“I don’t know if I’m going to reach that level again. But what I don’t have any doubt {about} is that {I am} going to die for it.” Nadal said in his quest to attempt reclaiming No.1.

Nadal had failed to take four break points in the first set as a spring surprise from world No.6 saw the Canadian quick turnaround to take a lead 5-3 and went on to simply wrap up the set after an early lead. Auger Aliassime went to close the game in two hours having had a brilliant match.