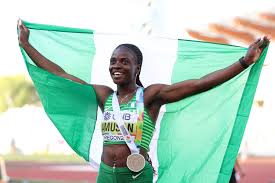 Nigeria’s Tobi Amusan who smashed the women’s record in 100m hurdles at this year’s World Athletics Championship in Eugene, Oregon is among the finalists for the Women’s World Athlete of The Year.

Amusan who was sterling in performance this year has dominated the women’s 100m hurdles, setting a world record time of 12.12seconds in the semi- finals of the World Athletics Championship in Eugene, Oregon in July before winning the gold the final in a time of 12.06second (but wind assisted).

Jamaica’s Fraser- Pryce who won a record fifth world 100m titles and quest which strengthened her claim to be regarded as the best women’s sprinter of all time is a top contender for the award. The 35 year-old who sparkled to victory at World Athletics Championships and the fourth- fastest ever women’s 100m of 10.82 seconds at the Diamond League in Monaco, could spring a surprise winning the award, she super performer achieving in a season a record seven sub-10.70times.

Venezuelan Rojas, who set a new world record of 15.74m to win the gold medal in the triple jump at the World Athletics Indoor Championships in Belgrade in March also in the finalists. The 27 year-old also won her third straight outdoor world title at the world event, winning the gold in Eugene, Oregon in July.