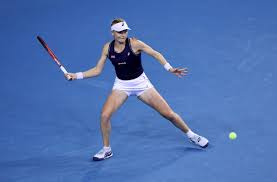 Britain will be without Emma  Raducanu when they battle Spain in the group stage of the Billie Jean King Cup Thursday.

The British had lost the opening game against Kazakhstan Tuesday and could be eliminated if they suffer a defeat by Spain. With the team comprising Harriet Dart, Katie Boulyer, Heather Watson, Okivia Nicholls and Alicia Barnett. The final tie against Spain is obviously crucial.

With the competition in the BJK Cup made up of just 12 team finals with the teams split across four groups and the four top teams progressing to the semi-final through round robin stage.

The British failed to qualify back in April but got automatic entry with Glasgow hosting the event in which the British had a record winning advantage over Spain 2-1 in the women’s tennis world cup.

Belgian Elise Mertens was able to arrived the Billie Jean King Cup after winning the Fort Worth doubles finals on Monday night. She had won with her pair Veronika Kudermetova.

Meanwhile, Iga Swiatek had withdrawn from the Billie Jean King Cup complaining of the close tight programme of the women tennis world cup and the Fort Worth tournament that it is ‘not safe’ considering the tight schedule.

Obviously not even 24hrs later after taking flights, three flights through six time zones to arrive in Scotland later in the night of Tuesday.