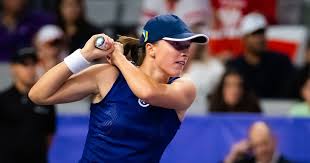 America’s Coco Gauff suffered a two set defeat of 6-3 6-0 to the world No, 1 Iga Swiatek at the WTA Finals in Fort Worth.

With the win Swiatek advance to the semi-final having had fantastic matches at the group stage without dropping a set at the current format which was re-introduced in 2003. She will face Aryna Sabalenka in the last four on Sunday.

In other match earlier, Carolina Garcia came from behind to defeat Daria Kasatkina in dramatic three set match to advance to the semi-final. She will play in-form Maria Sakkari.

Meanwhile, Swiatek has praised her performance saying she wouldn’t have thought of the sterling record last year. “I am happy with my progress, I feel confident right now, consistent and could keep my focus.

Swiatek broke Gauff for the second time having won opening six games that went on serve, She had earlier broken Coco first in what was about the Pole.

The second set saw Iga clinch every game to land the victory in 70 minutes.

Swiatek is presently on 15 match winning streak against top 10 oppositions, which was last achieved by Justine Henin in 2007.

Her opponent in the semi-final Belarusian Sabalenka had already suffered four defeats this year to world No.1 Swiatek. While in the other semi-final, Sakkari who has been in-form is favourite to beat Garcia.

Obviously the final will be exciting considering the performance of the four semi-finalists but the world No. 1 remains favourite to win the title.