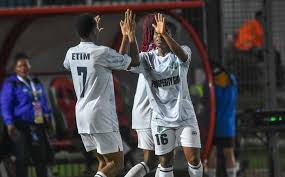 Nigeria’s Bayelsa Queens secured a vital 3-0 win against Egyptian champions Wadi Deglas, at the Stade Prince Heritier to book a semi-final ticket in the CAF Women’s Champions League for the first time on Sunday.

The Nigerian club side had an early good start dominating play, it paid off with Juliet Sunday netting the first goal and Mercy Itimi scoring a brace in the second half to ensure the Prosperity Girls qualify to the semi-final stage.

The eight minute first half goal came on opportunity from an error by the Egyptian goalkeeper before Juliet Sunday capitalized on it smartly to score. After the goal the Prosperity Girls pressured the North African with Mercy Itimi and Etim Edidiong close to scoring which the rest of the first half ended without an additional goal.

On resumption of the second half the Nigerian side got off to business early netting just three minutes into the second half with a Mercy Itimi strike. She added another five minutes later to seal a brace and qualification of the Prosperity Girls to the semi- final of the Champions League.

Bayelsa Queens obviously was impressive that in spite the three goals lead, they ladies continued their effort for more goals, it almost paid off at the twilight of the second half with substitute Grace Igbomalu strike but was ruled offside by a VAR check which spotted an infringement in the build up to the goal.

With the win Bayelsa Queens will play against FAR Rabat in the semi-final encounter next week.

In other matches Mamelodi Sundown of South Africa outshined 10- woman TP Mazembe 4-0 with Zanele Nhalpho scoring from the penalty spot and Lelona Daweti adding another after a well- built attack from Melinda.

The defending champions showed character of a champion with Melinda Kgadiete’s third goal in the early stage of the second half and Salome Kekana’s last minute goal which increased the lead to 4-0 over Mazembe. The Congolese side had suffered a set -back in the 85th minute with a red card.

Meanwhile 16 year-old Bayelsa Queen’s Mercy Itimi won the Woman of The Match and she strongly believes her team will be victorious against their next opponent in the semi-final.