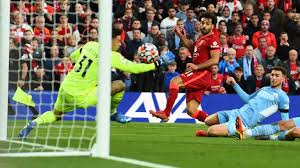 Egyptian international Mohammed Salah continued where he stopped after netting three goals in his last match against Rangers, he produced a brilliant masterclass of control to take down Allison’s long kick, spinning away City’s defender Joao Cancelo before beating goalkeeper Ederson with cool finish in the 76 minutes of the match at Anfield.

Liverpool had come into the match with 13 points behind Manchester City who had scored 13 goals in their last three Premier League matches. And Liverpool’s worst start in 10 years, but the Egyptian Salah made the difference for the vital three points for the reds.

The line-up for Liverpool prior to the kick off was obviously one that is having a depleted team with Joe Matip injured, he’s been joined by Ibrahima Kante in the sidelines and Trent Alexander Alnold on the bench nursing playable injury.

While Norwegian rising star Eirling Halaand is in the starting line- up for City and the main attraction of the spectators, currently one of the hottest strikers in Europe.

Halaand started creating a good number of chances but could not convert the opportunities to goal before the break. He had been denied a chance for conversion with an attempted chip over goalkeeper Ederson which was denied by Allison. He also came close twice through headed ball opportunities with beautiful crosses from Kevin De Bruyne.

The resistance from Liverpool’s defense absolutely showed their intention in the first half especially at the early stages of the game as they intended to sustain any goal to be scored in any of the half.

That wasn’t achieved until they went on first half break, although the game had been explosive despite both sides not scoring before the break.

The second half began with Liverpool making attempts to score thanks to Roberto Firmino’s effort which was saved by Ederson. But it didn’t take much of a time before the referee consulted the VAR after Foden had played the ball in the net having fired a deflection from Gomez.

After the consultation Halaand was penalised for pulling down the shirt of Fabinho. But in the 76 minutes of the game Salah made the difference, taking off Liverpool’s worst start in 10 years. The decisive breakthrough with outstanding control from Salah, the Egyptian was excellent, cooling the ball to beat City’s goalkeeper.

Anfield was now alive! All effort from City for an equaliser met a resistance defense of the Reds. The fight back in the closing stages was carefully checked by Liverpool players having learnt their lesson from sending off Coach Jurgen Klopp through a red card by referee Taylor for overreaction.

The game ended with City four points behind Arsenal and certainly will work hard to avoid a further defeat if they are to catch up with the Gunners.