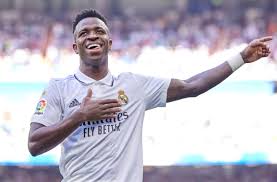 Real Madrid return to the top of the Spanish LaLiga on 18 points in six matches, two points ahead of Barcelona in a match it was alleged Atletico fans racially abused Brazilian forward Vinicius before the Madrid derby.

A spectacular goal from Rodrygo in the first half and another from Federico Valverde put Real in a commanding position against their rivals. Madrid had kept the tempo to their control before Mario Hermoso pulled a goal back at late stage of the match. But a fight back from Atletico saw uphill task as they were unable to find an equaliser, with an Atletico defender sent off at the twilight of the game.

Meanwhile, Vinicius and Rodrygo celebrated Real’s opening goal as the hosts fans watched both players dancing in their quest to keep Real winning start- back to the top.

According to SkySports Atletico fans were filmed racially abusing Vinicius ahead of Sunday’s game which the visitors won 2-1.  It will be recalled, that criticism had trailed head Spanish Football Agents Association, Pedro Bravo, who was criticised last week for saying Vinicious needed to stop “monkeying around” when celebrating goals. Although the remarks has been considered not a racist remarks by a number of Brazilian players, including Neymar and Dani Alves.

In a reaction following the accusation, Bravo has since made a comment that it was not intended to be interpreted as racist and that it was just a phrase used in Spanish.

Meanwhile former Manchester City player Gabriel Jesus who now ply his trade with Arsenal had earlier on Sunday said his dancing celebration for his goal against Brentford in the English Premier League was dedicated to his international team mate and friend.