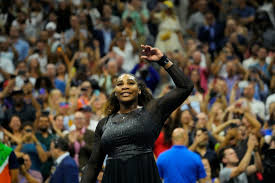 Serena Walliams, arguably the best female tennis player of the modern era bid farewell to the US Open 2022 despite losing in her retirement match at the Arthur Ashe Stadium in New York.

The 23 Grand Slam champion had wanted to finish her 27 year professional career with a victory but met resistance power of Australia’s Ajla Tomljanovic to succumb to straight set defeat 7-5, 6-7 6-1. Serena who became a US Open champion in 1998/1999 season and won six of the titles had announced she will “evolve away” an intent she will retire after the US Open.

The American tennis icon who will be 41 next month, obviously had the psychological determination but lacked the physical stamina, which she admitted after the match that she should have started preparation on time.

Meanwhile, Serena who at a time a 21-year- old was already seven time Grand Slam champion has lavished praise on her elder sister Venus who was the family’s trailblazer. Thanking also, the parents Richard and Oracene for the constant support and love they have shown over the years in her blistering tennis career with 23 Grand Slam and 14 doubles titles.

Serena who became emotional following her career likely ending defeat at the hands of Ajla Tomljanovic in a three-set thriller on Arthur Ashe had earlier lost in the doubles with her sister Venus to Czech’s 17 year-old teenager Linda Noskova and veteran Lucie Hradecka, 37 year-old in the first round of the doubles at the Arthur Ashe.

The entire world of sports became glued to Williams throughout her run in the three singles matches and a double match with an aura of glamour as top American celebrities, Tigers Woods, Gladys Knight and actress-singer Zendaya Stoemer Maree Coleman have come to watch the American tennis icon in her match at US Open.

Although the modern tennis matriarch did say ‘I don’t think so, but you never know’ on her retirement. This obviously means we could see her more in exhibition matches.  But time will tale as the world bid a farewell to arguably the most crowned tennis star in modern era after the US Open.