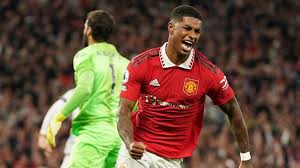 Manchester United commanded efficient counter attack and brilliance in defense to score a first half goal in the 18 minute before the visitors clawed one back in the closing stages through Egyptian international Mohammed Salah’s header.

United was going into the match with a difficult start of the seasoning having been brushed aside by Brighton and Brentford in the opening two game defeats in the new season. This ushered most fans around the world reacting with criticism of the team, especially in social media.

But this time the Monday night Premier League match against Liverpool it was a different story as United displayed from first whistle the right character and energy to win. The first goal was a master class from Sancho who got an assist pass, he smartly waved off Liverpool defenders before a return in another direction to ease the ball pass tLiverpool goalkeeper.

United coach Erik ten Hag selection paid off with the back four near excellent in defending, Varane and Tyrell Malacia were fully justified and the fans applause also goes to Marcus Rashford for his aggressive performance in the attack.

Obviously, Sadio Mane’s absence was felt in the attack of the visitors as his combination with Mohammed Salah was missing coupled with holding on the ball to create a way for his supporting strikers to score. If he doesn’t!

With the departure of Sadio Mane to Bayern Munich, the arch-rivals’ competition in attack was missing in Liverpool.

Marcus Rashford proved that on a counter play in 53 minute to produce a beaut- goal for Manchester United beating David de Gea which silenced the visiting Liverpool supporters at Old Trafford.  The impact of Rashford upfront could not be ignored as Ronaldo’s absence wasn’t felt before he was introduced in the closing minutes of the second half.

Meanwhile, Rashford has described the match as a massive game for the club, he told Sky Sports. “I’ve always said, regardless of the circumstances, that you’re in a game with Liverpool.

“It’s massive no matter what circumstances you’re in. To get the win is massive. We’ve not done so well starting the season so it’s good to pick up the first three points.

The England international admitted it was just energy considering the high tempo of the game which they got tired towards the end of the match but kept going and stuck at it.

“They got a goal back and we didn’t fold- we kept defending well. It was an enjoyable game to play in,” Rashford said.

Liverpool coach Jurgen Klopp will fight to rebuild without Sengalese, Sadio Mane whose absence obviously was felt as predicted by some pundit before the match.

Meanwhile, Manchester United coach Erik ten Hag has been hailed for the selection and changes made at the twilight of the game which saw Portuguese international Christiano Ronaldo introduced in the second half.