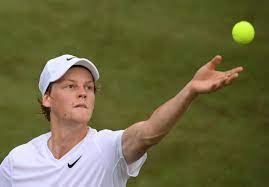 Italian Jannik Sinner has set up a quarter-final clash with Djokovic in the ongoing Wimbledon after 6-1 6-4 6-7 (8) 6-3 defeat of Carlos Alcaraz. 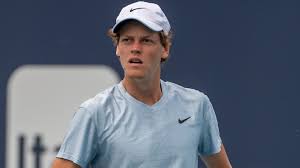 In the match which Carlos Alcaraz saved two match points and clinched the third –set tie break but was not enough to send the Italian out of the All England Club. The high performance by both players was fantastic to the admiration of their fans at the grass court.

With just hours after the 100 years celebration of the Centre Court, the young players showed class that they belong to the future generation of tennis. Alcaraz had maintained blistering returns on Sinner frequent ballstriking at the Centre Court.

The 20 year-old Sinner who was beaten by 19 year-old Alcaraz in November at the Rolex Paris Masters had an upper hand this time around with decent tactics that paid off, dominating play with five games in a row to breeze to the opening set.

In the first game of the second set, the Spaniard should a character of his country man Rafal Nadal with a quick trademark drop shot with a deft winner of his own, having a pace set decisive play but Sinner did open up a two-sets-to love lead. The crowd at the Centre Court had no option than to react to the performance of both players.

Sinner went on to win the match to set up a clash with Djokovic who featured as one the past champion at the celebration of 100 years of Centre Court. Other past champion that were the roll are Roger Federer, Billie Jean King, Rod Laver and Bjorn Borg.

Sinner said after the match that he was happy with the victory, despite struggling in the early stage of the first set but believes he has got something going to play good tennis in the next game.

He further said “Carlos is a very tough opponent and a very nice person, so it is always a huge pleasure for me to play against him.”

Snner added according, “Today with such a great crowd and special day today, 100 years [of Centre Court]. It’s amazing.”

While the match against Djokovic obviously is an anticipated explosive, it remains if Sinner can maintain his composure that saw him play fantastic tennis with quick return which has continued to wreak havoc at All England Club.