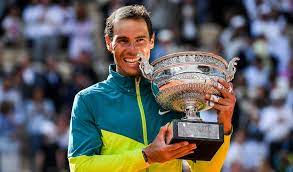 The 36 year-old who made his debut at the Roland Garros in 2005, obviously was the favourite to win the title despite suffering from foot injury which some pundit thought he might retire before the end of the tournament.

Nadal in the opening set was brilliant, in spite of Ruud quick responses, ‘King of clay’ got the advantage to take the lead in the first set. But Ruud was impressive with a 3-1 lead in the second set with Nadal double fault.

The Norwegian was unable to sustain the tempo with experience making the difference, but the man who has now equaled Steffi Graf for second most- major successful singles titles in Open Era upped his game to make a comeback to lead the 2-0.

He continued in same fashion to claim his 14th Roland Garros title and go two ahead of great rivals Novak Djokovic and Roger Federer.

In a surprise reaction, Nadal said he didn’t believed at 36, he would still go competitive, playing at the most important court and his career still going strong to play in the final.

“It means everything to me. It means a lot of energy to try to keep going. I just want to say ‘merci, merci beaucoup.” Nadal said.