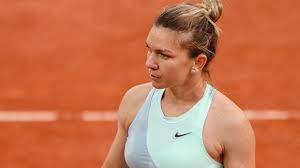 2018 French Open champion Simona Halep was another big name to be knocked out at the ongoing Roland Garros in Paris.

She lost to China’s Zheng Qinwen 2-6, 6-2, 6-1. The two time Grand Slam champion obviously appeared to have difficulties with her breathing and called for the trainer. Especially in the second half of the match which the 19 year-old Chinese rising star won 11 of the 12 games.

The situation which sent panic but later settled which she was able to make a statement, affected her performance “didn’t know how to handle it” Halep, said according to the BBC.

“I don’t really know why it happened, because I was leading the match. I was playing well.

“But it just happened and as I said, I lost it. I couldn’t focus,” she added

She admitted it was nothing dangerous, in her opinion but it happened! So it’s good that now I can smile.’

In other matches world number Iga Swiatek was in sparkling form as she cruised into the third round defeating American Alison Riske in 61 minutes 6-0, 6-2. The 2020 Roland Garros champion said after the match,

“I feel like I’m using my new position to put more pressure on my opponents,”

She added, “I’m pretty happy that I could convert it to a way that is really helpful. I feel like my confidence is back.”