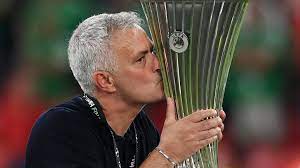 Roma started the game with defensive formation to cope with the early pressure from Feyenoord. Roma regained confidence before scoring in later part of the first half to lead 1-0 and clinch the inaugural title.

The Portuguese who brought a new glory to Roma with the record of clinching their first title after 14 years. Hailed his historic achievement of becoming the second manager to win five European titles, emulating the record of Giovanni Trapattoni. Tearful Mourinho after the match in Albania said, “I feel like a true Romanista.”

The unique achievement has prompted Jose, as he vows to stay to ‘build a strong project’ with the club he has just spent 11 months as manager.

Though, he admitted the Conference League competition is one they started with sensation, but got tougher when stronger competition came from the Europa League dropped teams to the competition with the likes of Leicester City, Olympique Marseille and Feyenoord.

Mourinho who is already in love with the fantastic AS Roma fans, the club atmosphere obviously is staying next season. In fighting back tears on Sky Sport Italia,

Mourinho , said, “…. I realised the moment I arrived what it meant, they were waiting for this. As I told the lads in the locker room in Turin, we did what we needed to do, qualify for the Europa League. We had a great work all season.

The Special One! Who has now had five European finals- Porto, Inter Milan, Manchester United and Roma since 2003 with the trophy taken home with him. Excitingly, said he will go on vacation and sit on the beach to think about all this for a while.

Mourinho added, ‘The great thing about my career is that aside from the Europa League with Manchester United, doing it with Porto, Inter and Roma is very, very, very special. It’s one thing to win when everyone expects it, when you made the investments to win, but it’s quite another to win when something remains immortal, that feels truly special.

‘ I think of myself, of course, but above all the Roma fans who can celebrate tonight, enjoy themselves and remember this night forever.;

Jose who is a strong fan of the clubs he did coach when asked if he feels like a real Romanista tonight. Said,

‘Of course I feel like a Romanista, but that might be my way of working. I am a Porto fan an Inter fan, A Chelsea fan, I am crazy about Real Madrid, I am now a Roma fan. I belong to all those clubs because we had these moments together.

‘Tonight, with all due respect for all the clubs I worked for before, I am 100 percent Romanista, because these fans are truly incredible.’