Nigeria trio of Leon Balogun, Joe Aribo and Calvin Bassey had to wait till the extra-time with Rangers before two quick goals to win the Scottish Cup against the Hearts. 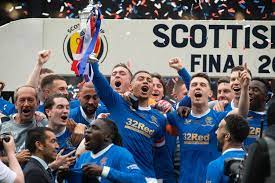 The victory erased the pain of their Europa League final defeat to Eintrancht Frankfurt of Germany on penalties, after a 1-1 draw in the club’s first European final for (14 years) in the club long history.

With Rangers surrendering the Scottish Premiership title to Glasgow rivals Celtic, obviously the energy in camp was to overcome the record of their defeat in Seville. 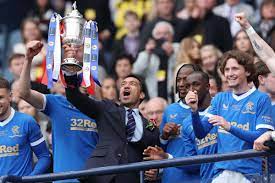 The Van Bronckhorst boys had a good match to the Hearts team in the opening half of the game and increased the tempo in later part of the first half. Nigeria international Joe Aribo who has found “new love” in his supporting striking role position for the club was denied a goal by Craig Gordon save in the closing half normal time.

Von Bronckhorst who won the Scottish Cup playing with Rangers in 2000, took over the team from Steven Gerrard just in November, the character and play of his team increasingly showed they were set for a record.

Ryan Jack and Scott Wright rose up to the occasion with quick succession goal in the extra-time. Obviously did break the ‘heart’ of the Hearts!

The Rangers fans at the Hampdem Park celebrated the victory at the blow of the referee’s final whistle to lift the Scottish Cup for the first time since 2009.