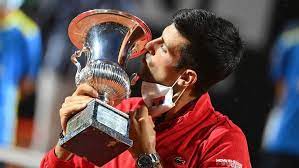 Novak Djokovic secured his 6th title in Rome- and record- extending 38th win in a Masters event as he beat Stefanos Tsitsipas 6-0, 7-6 (7-5).

The Serb who fought back in the second set having had an easy cruise in the first set, was down 4-1 before his impressive shock- back at the clay-court final. He sees the victory as a motivation to the upcoming French Open later this month in Paris.

“I could not ask for better lead- up to Roland Garros.” Djokivic, said.

The 34 year- old, most pundits favourite to Roland Garros was a delight to watch as he did not drop a set through to the final. But he has the new “rave of the moment”, 19 year -old Spaniard Carlos Alcaraz who clinched the Madrid clay title in Barcelona to contend with. 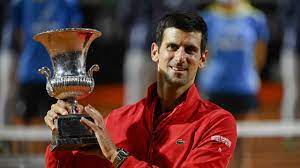 Djokovic who was obviously, rusty exiting in the first round of Monte Carlo and gradually picking up at the Madrid open before he was shown way out in the semi-final, admitted early start of the year was not easy,  following troubles with the deported incident in Australia and subsequent tournaments unimpressive start.

“After everything that happened at the beginning of the year, it was important for me to win a big title, especially with Grand Slams coming up where obviously I want to play my best,” Djokovic said.

The tile win for sure, counts a new feeling which all that happened is now behind and he is mentally well, fresh and sharp for Roland Garros, but 6th ranked Carlos Alcaraz could pull another surprise as the French draw closer.