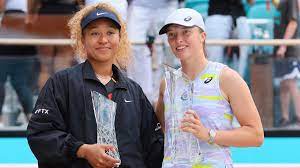 Polish Iga Swiatek showed her desire to take Ash Barty’s World No.1 ranking with a spectacular 6-4 6-0 win over Japan’s Naomi Osaka in the final of the Miami Open to clinch the title.

The 20 year who did set a record as the first female to win three WTA 1000 titles of the year is expected to become World No.1 Monday with Barty already retired from tennis. With that amiable record she also becomes the fourth woman in history to the “Sunshine Double’- going –back- to- back at Indian Wells and Miami in Califonia and Florida. She joins Victoria Azarenka in 2016 win, Kim Clijsters 2005 and Steffi Graf’s 1994, 1996 to accomplish the feat.

After the match she admitted it has been weeks of intense and was in thought if she could really keep up with the streak that she has.

“It’s amazing for me that I could show mental toughness because my whole life I thought I could do more and sometimes I was losing and I didn’t even know why.

But despite that the season has been amazing for the young polish, “This season I feel like everything clicked so it’s great and I am really happy.” Swiatek said. 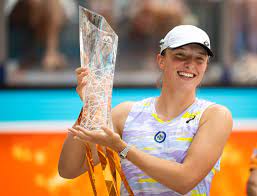 Swiatek is on the top prediction to clinch the French Open which starts 22 May. But it remains to be seen if Naomi Osaka who had a brilliant run in Miami will make a good come-back having lost the final and knocked out in the second round at the Indian Wells prior to Maimi Open.