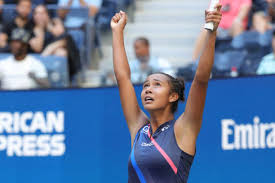 Canadian teenager Leylah Fernandez has ended Aryna Sabalenka’s run at the US Open Tennis Tournament, in three sets of 7-6 (3), 4-6, 6-4 in a nervy semi-final match, Thursday. She will be up against Britain teenager Emma Raducanu in the final, Saturday.

The 18 year-old Briton was in blitzing form as she ambushed the 17th seeded Maria Sakkari of Greece, in two sets 6-1, 6-4. She had won three matches in the qualifying tournament before the opportunity to be in the main draw. Emma, who is ranked 150th in the world, has been impressive at the Grand Slam so far, winning all nine matches against her opponents without dropping a set to reach her first US Open final in the Open era.

With Naomi Osaka having been knocked out by Fernandez and Serena Williams out due to injury, the final match is being described as the first teen Grand Slam US Open final in the Open era.

Meanwhile, in the teenagers’ battle as ‘being described’ for the US Open final in the Open era, the 19 year-old Canadian had stunned four top tennis players rated among the top 20 seeded players in the tournament, namely, second, third, fifth and sixteen. En route to the final, she beat Japan’s ‘Face of Tokyo Olympic’ and 2018 US Open Champion, Naomi Osaka in the fourth round and three time Grand Slam winner, Angelique Kerber. She also outshined Elina Svitolina.

With her outstanding performance at the US Open, she became the third Canadian to reach the final of Grand Slam in three years following the foot-steps of Bianca Andreescu, who beat Serena Williams in 2019.

The Canadian blitzing form and the aura of her 19th birthday celebration, just on Monday, was almost flipped away in the first set as Sabalenka led 4-2, but the series of errors forced Sabalenka to blame herself after the match. To her ‘obviously’ she felt her opponent didn’t do much, but she blamed herself for the defeat.

Fernandez realising the weak side of her opponent took control of the tempo of the match and it paid-off with a 4-3 lead after a crucial moment of tie- break before eventually winning the first set, 7-6 (3).

Sabalenka bounced back in the second set as Fernandez showed signs of being jittery, although the set could be described as a near contest but Sabalenka nipped it with, 4-6.

On resumption for the third set, Fernandez, obviously must have had some good pep-talk as she quickly led by 3-2 but Sabalenka hit back despite starving herself to fault, but levelled 4-4.

Fernandez, who was more relaxed but had intense concentration, delivered power like a zoom shot to her opponent, now the match turned to her favour, she was on the driver’s cruiser’s seat and won 6-4, to hit the Flushing Meadows final to the applause of the crowd at the Arthur Ashe Stadium.

Meanwhile, her opponent Raducanu has a lot going for her to the final with an impeccable achievement, she is the youngest British finalist in 62 years and first British woman to reach a US Open final in 53 years, following Wade in 1968. She is also the only fourth British woman to reach a Grand Slam final in the Open era.The final comes up Saturday, as we wait to see who wins the first teenagers Grand Slam final in the US Open Final in the Open era.