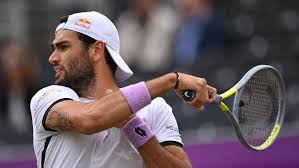 Novak Djokovic survived an early scare to fight back as he beat American Jenson Brooskby to reach the US Open quarter-finals and keep his calendar Grand Slam hopes alive. The world No.1 who obviously , had had a poor start in his first set at the Flushing Meadows got over the pressure winning 1-6, 6-3, 6-2, 6-2.

With the win, the Serb will battle Matteo Berrettini for a place in the semi-finals, hoping to rekindle the Wimbledon final in July, where he defeated Berretini to claim the title. While, the Italian who beat German Oscar Otte 6-4, 3-6, 6-3, 6-2 to reach the quarter final will fight to achieve his ambition to better his US Open 2019 semi-finals effort.

Meanwhile, German Alexander Zvereve who lost last year’s final to Dominic Thiem was better than Italian Jannik Sinner to win 6-4, 6-4, 7-6 (9-7). The Olympic gold medallist who has been in sterling performance with 15 –match winning streak, having won the Cincinnati Open crown prior to the US Open will face Lloyd Harris of South Africa in the semi-finals. The African tennis star, Harris had beaten Reill Opelka in four sets to continue his quest for a semi-finals spot.