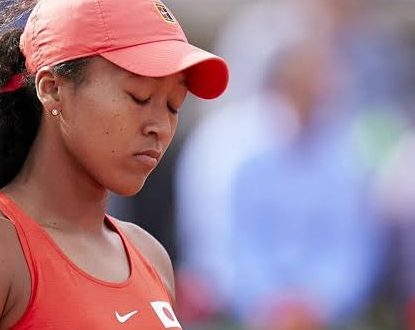 The face of Tokyo Olympic Games Naomi Osaka suffered a two straight set 6-1, 6-4 defeat by Czech Republic Marketa Vondrousova in the third round at the ongoing Tokyo Games.

The World No. 2 Naomi had defeated China’s Zheng Saisai in the first round and beat Switzerland’s Viktorija Golubic in the second round but it was shocking to her fans days after lighting the Olympic cauldron, she exited from the Tokyo Games in two straight set considering her top rating.

Naomi, who won the US Open in 2018 defeating Serena Williams in the final, had retired from the French Open in May and withdrew from Wimbledon prior to the Tokyo Games.

The 23 year-old tennis star did state her reasons for her withdrawal tournament citing anxiety to media interviews as she needed to prioritise her mental health, having “suffered long bouts of depression” after the US win 2018.

“The best thing for the tournament, the other players and my well-being is that I withdraw so that everyone can get back to focusing on the tennis going on in Paris,” Naomi said during her withdrawal from the French Open.

Though, the pride of Japan returned after two months break to the delight of the global community lighting the cauldron in Tokyo Games opening ceremony. She had said prior to the Games that she was recharged and ready for the Olympics.