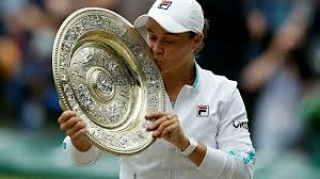 The 25 year-old had almost a replica of Serena Williams 2012 Wimbledon final against Poland’s Agnieszka Radwanska as first women’s final to go into three sets since Serena’s final against the Polish.

Barty who took control of the match with a 4-0 lead over her opponent gathering the first 14 points, obviously looked more confident to clinch the title but the 29 year-old Pliskova realising the expectation of her fans, steadied herself as she got back into the game, especially serving for the match in the second set, she took it into a decider.

The 2019 French Open champion who looked like one in disbelief got her break early and taking her opponent with fast pace returns before cruising to victory over the Czech Republic tennis star. Barty who has described her return as miracle having pulled-out of the French Open in the second round due to hip injury.

“Being able to play here at Wimbledon was nothing short of a miracle,” said Barty.

She added “They kept a lot of cards close to their chest. It just proved how much we were against the odds.

To be playing pain free through this event was incredible. Certainly now chatting to them it looked a lot less likely than I felt, it’s been incredible month.”

Barty also appreciated her team and people she has worked with over the years for making her who she is, especially during her week experience at Wimbledon.

“Some of my toughest moments have come at Wimbledon. Now some of my most incredible moments have come here as well. It’s just an iconic venue, an amazing Club. To be able to learn so much from this place, I think I’m a very lucky girl.”

She paid tribute to her fellow country woman Cawley as she has been a source of encouragement for herself and the young people around the world, especially in Australia.

“Evonne is a very special person in my life,” said Barty

“She has been iconic in paving a way for young indigenous youth to believe in their dreams. She’s done exactly that for me as well. She’s been an icon for years.” The New Champion said.

Meanwhile, she has set her ambition in encouraging the young of their indigene and around the world to set the dreams high and pursue it just as Evonne has done for many and she is proud to emulate her same path.