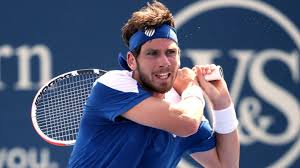 French Richard Gasquet suffered defeat at the Roland Garros losing 6-0, 7-5, 6-2 to Spaniard Raphael Nadal who played with ruthless intensity securing nine points in 22 minute in the opening set and subsequently moved 5-2 ahead in the second set.

Nadal celebrating his 35th birthday saw Gasquet push back in an effort to turn the contest around with deep forehand, fighting back for 5-5, but the Spaniard refocused to break for the set.

In the third set Gasquet maintained good form in a very competitive set until Nadal broke decisively in the sixth game and won the final game convincingly to set up a clash with Briton Norrie Cameron.

The World ranked 45th, Norrie came from a set down to beat world number 54,Harris 4-6, 6-3, 6-3,6-2. With Dan Evans, Johanna Konta and Heather Watson all British out in the first round, the 25 year-old could be the only one to cause an upset in the competition, if he wins against Nadal.

“Obviously I’m going to be the underdog going in there, so no pressure on me,” Norrie said according to the BBC.

He continued, “I’ll go out and see if I can execute my game and frustrate him. It’s another wonderful experience for me playing him, again, third round of a Slam, especially where he’s been very dominant.”

Meanwhile, Nadal, who faces Norrie in the third round, easily passed Richard. He said “I played amazing first set, I don’t feel Richard was playing that bad to have that score. I didn’t miss a ball and was hitting the spots all the time,”

“The important thing is to win the match, but of course it is better to win in straight sets. The main thing is I’m playing well.” Nadal said.

With the game against the Briton who reached two finals and having 25 wins in 2021, obviously it will be a tough match against Nadal and Dan Evans, Johanna Konta and Heather Watson will turn spectators hoping Norrie will redeem British pride having lost their games in the first round.