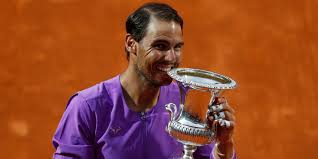 Rafael Nadal’s positive quest to have a good tournament at the French Open did start with a victory at the Italian Open as he defeated Serbian Novak Djokovic in battling 7-5,1-6,6-3 in the final, Sunday in Rome.

With Djokovic ahead in their head-to-head wins tally 29-27 to the final, the game started with both players having an early drop in serve in the first set, but the Spaniard stepped up his game to secure a key break at 5-5.

World No.1 Djokoic improved in the second set dominating play but could not withstand the quick shots from Nadal who took advantage of his opponent’s inability to sustain two break points in the fifth game of the decider.

In the next game, 34 year-old Nadal had a better understanding of the Serbian using his trademark stunning backhand to break 33 year-old Djokovic. He maintained his master class performance cruising to hold his serve and tactically kept his discipline to win his 10th Italian Open in a match that lasted two hours and 49 minutes.

After the game, Nadal expressed his tough moments in the tournament, especially against Shapovalov in the last 16 match he won the tiebreak in the decider.

“I was lucky in some moments, especially against [Denis] Shapovalov,” Nadal said.

He added “And then I think I played a good tournament, I have been playing better and better, finding my rhythm on clay. I had a very positive week and I’m very happy.

“It’s amazing to have this trophy in my hands for the 10th time. It’s something impossible to imagine but it happened so I’m super happy and can’t thank my team enough.” Delighted Nadal said.

Nadal had spoken of his desire to maintain a good shape ahead of his defending the French Open which starts on 30th May in Paris.