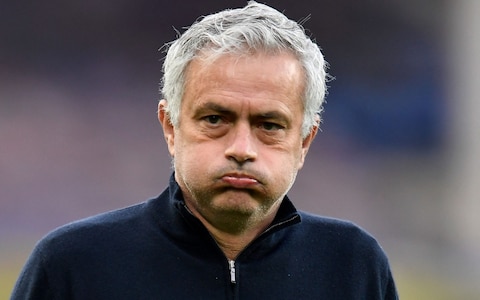 Former Real Madrid, Chelsea and Manchester United manager Jose Mourinho has been relieved of his duty as manager of Tottenham ahead of Spurs Carabao Cup final against Manchester City.

Mourinho who has an impressive proven track of record was appointed in November 2019 replacing Spurs former Manager Muaricio Pochettino, but his desire to keep pushing for Europa Cup spot with five points behind fifth place West Ham in the English Premier League Is now cut short.

In a club statement, Spurs said, “The club can today announce that Jose Mourinho and his coaching staff Joao Sacramento, Nuno Santos, Carlos Lalin and Giovanni Cerra have been relieved of their duties.”

The club chairman Daniel Levy has said, Ryan Mason and Chris Powell will take charge ahead of this weekend’s Carabbao final showdown at Wembley.

“Thank you for everything Boss. A pleasure to have worked together. I wish you all the best for your next chapter.” Harry Kane said.

In another heartfelt message following the news of Mourinho’s exit, Heung-min Son said in his Instagram,

“I have no words to describe how I’m feeling,”

“It’s been a pleasure to work with you

I’m sorry things didn’t work out and truly grateful for the time we’ve had together”.

Spurs Chairman Daniel Levy, commended Jose Mourinho for the good work relationship despite the club decision to relieve him of his duties,

“On a personal level I have enjoyed working with him and regret that things have not worked out as we both had envisaged. He will always be welcome here and should like to thank him and his coaching staff for their contributions.

Levy also describe Mourinho as a true professional who showed enormous resilience during the pandemic.

With Spurs recruitment net now expected to be cast far and wide in searching for a new coach, Leicester boss Brendan Rogers is a name in the frame. Also, highly rated RB Leipzing coach Julian Nagelsmann, 33 and Steven Gerard who guided Rangers to Scottish Premier League are another names expectedly being touted for the position.