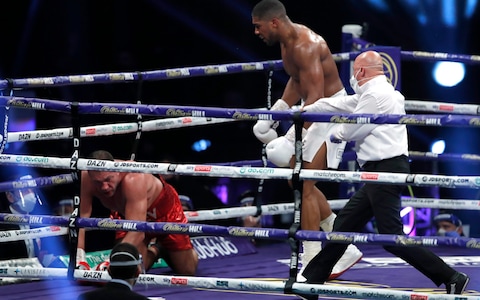 Nigeria-British Anthony Joshua defeated Kubrat Pulev to retain his IBF, WBA and WBO titles in a fight Pulev floored on three occasions to set up a possible clash with Tyson Fury to decide an undisputed heavyweight champion next year. Already his manager has commenced work for the biggest boxing heavyweight fight.

American boxer Floyd Mayweather was present at the Wembly SSE Arena plus 1,000 spectators as Joshua gets closer to the fight with Tyson Fury. Joshua who started the fight landing series of punches and jabs on Pulev got into the third round with increased determination as he knocked down the Bulgarian but Pulev was able to escape a knockout.

Pulev who kept his composure despite Joshua’s dominance of the second round before surviving the third round which saw Joshua continue with intense display of punches and uppercuts before Pulev saw the canvas, Pulev, lasted longer than one could anticipate following the third round result.

In the other rounds, the 39 year-old was obviously managing to continue the fight with a warrior-determination but in the ninth round the previous uppercuts and right hands jabs that landed on Bulgarian showed he has fizzled.

To
Pulev could not withstanding the superior power of the British-Nigeria boxer who was desperate to send him to the canvas. It eventually came with brutal -colossal uppercuts in the ninth and the Bulgarian felled the third time as he landed to the ground for a goodbye to Wembly that night.

Anthony Joshua now retains his WBO, IBF and WBA titles for a possible fight with WBC champion for an undisputed heavyweight fight hopefully next year.

Meanwhile, Tyson Fury is not rattled by Joshua’s win “I’m not just saying it because he’s going to be a rival of mine, he’s going to be one of my opponents,” according to Sky, Fury told Good Morning Britain.

“I’ve always said for a long time that I do believe that Anthony Joshua is tailor-made for someone like my style. I think it’s going to be one of the most explosive, quickest fights you are going to see/ I’m aiming to take him out inside four rounds.”

Anthony Joshua who defeated Andy Ruiz Jr in December to reclaim the IBF, WBO and WBA titles now has the opportunity to fight Tyson Fury. His Promoter Eddie Hearn has insisted he would resume negotiations ‘straight away’ and Fury is hopeful that terms can soon be agreed for the biggest boxing fight in the world.