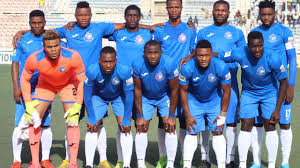 Nigeria club side Enyimba International FC of Aba, Sunday recorded a vital victory away in CAF Champions League preliminary round defeating Rahimo FC in 1-0 in at the Stada du 4 Aout in Ouagadougou.

The two time Champions League winner Enyimba FC in the 76th minute took the lead when Victor Mbaoma handed the Peoples Elephant an important away win to stand an advantage with an away goal.

With the second leg fixture scheduled for next weekend at the Aba International Stadium, the Peoples Elephant will hope to replicate their previous result with Rehimo FC last season which the Aba base club side overturned a first leg deficit to advance on a 5-1 aggregate.

Enyimba is one of the best team in Nigeria with numerous trophies including four Nigerian Professional League titles.

Meanwhile, Nigeria’s other representative in CAF Champions League, Plateau United of Jos, suffered a home defeat 1-0 to Tanzania club side Simba SC at the Jos International Stadium, Jos. The Jos base club side was unlucky in the 54th minute when Zambian International, Clatous Chama scored a goal to secure a vital away victory.

With the win, the visitors secure an important three points to the second leg which is scheduled for next weekend at the Benjamin Mkpapa Stadium Dar es Salaam, Tanzania

Simba SC of Tanzania club CEO Barbara Gonzalez has expressed delightfulness on the away victory in Nigeria, which is a confidence booster ahead of the clash with the Jos base club.

“Therefore, beating Plateau United before their home supporters is a big achievement” Gonzalez said as quoted by Daily News.

“We call upon our home supporters to pray for the club and show up in big numbers come this Saturday in a second return leg so that we go through to face Platinum FC of Zimbabwe.”

Simba coach Sven Vandenbroeck has warned his team of complacency ahead of the second leg tie against Plateau United,

“It was a tough game, against a very strong opponent who tried all tricks technically to find a goal but I congratulate my players because all 90 minutes were running to prevent them from scoring” Vandenbroeck to the club’s social media  after the match.

According to Goal.com, Gonzalez is unhappy with the host stadium considering its infrastructure, which he has blamed African football body and Nigeria Football Association (NFF),

“I think there are things to consider [Caf infrastructure checklist] as to why the stadium was sanctioned to host the match while it does not meet the required licensing standards.”

Meanwhile, coach of Plateau United, Abdul Maikaba is working on his side to overturn the result away if his side will have the hope of progressing to the next round of the Champions League.