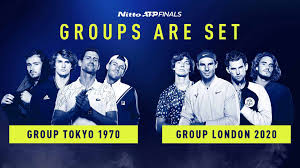 World No.1 Novak Djokovic has been drawn in Group Tokyo 1970 at the season finale, 2020 Nitto ATP Finals in London. In the draws made on Thursday, Djokovic leads the Group Tokyo 1970 alongside Daniil Medvedev, Alexander Zrerev and Diego Schwartman.

Novak Djokovic is bidding a record sixth trophy at the season finale with 39-3 match record and has qualified season 13 times. He triumphed at the event 2008 and 2012-2015.

Stefanos Tsitsipa won the season Finale in 2019 while Russian Alexander Zrerev was champion in 2018. Dominic Thiem who captured his first Grand Slam title this year at the US Open is making his first appearance at the ATP Finals alongside Argentine Diego Schwartman.

The 2020 Nitto ATP Finals will be held at The O2 in London from 15-23 November following the singles draws on Thursday. The tournament champion in 1970, Stan Smith is of the opinion that the London finale challenge will be a class considering the quality of tennis stars that will be at the finals.

“If you look at this draw, you look at Medvedev and Zrerev, who just played in the finals against each other in Paris last week, they obviously are playing quite well. They’re going to be pushing Novak in that group,” Smith said, according to ATP

Smith added, “But on the other side, Rublev has really been hot overall for the year, it’s unbelievable. Tsitsipa is the defending champion and Thiem is the US Open champion, so Rafa’s got his hands full with those three guys.”

The event which was first held in Tokyo, Japan in 1970 was gallantly won by Stan Smith. This year’s event marks the 12th final edition in London. The 2021 finale season event is scheduled to hold in Turin, Italy, after this year’s 50th Anniversary.