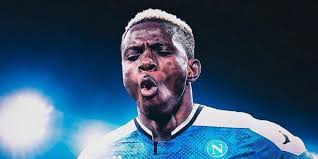 In the list released Thursday by the NFF, Rohr also called up Captain Ahmed Musa who recently terminated his contract with his Saudi club Al Nassr to beam his attention to a new club in Europe. Defenders William Ekong, Kenneth Omeruo, Leo Balogun and Chigozie Awaziem also makes the list.

In midfield, Turkish base, Oghenekaro Etebo, Everton, Alex Iwobi, forwards, Moses Simon, Samuel Chukwueze and Chidera Ejuke are also on the list to face the Leone Stars in the double game, AFCON qualifier.

The duo of Joseph Ayodele-Aribo and South African based goalkeeper, Daniel Akpeyi also joins Osimhen to make a return to the national team, which Osimhen missed the last two friendlies on health ground.

Zaidu Sanusi who impressed in the last friendly matches against the Carthage Eagles and the Desert Fox also made the list for the November 13 and November 17 game against the Leone Stars.

The camping begins on November 9 at the Protea Hotel Emotan, Benin City, while the match on the 13 November comes at the Samuel Ogbemudia Stadium, Benin City and the return leg comes up in Freetown, Sierra Leone on November 17. Victory in both matches will guarantee Super Eagles place at the 2022 Africa Cup of Nations in Cameroon.