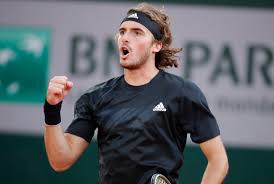 Greek young star Stefanos Tsitsipas was in super form during his quarter-final clash against arch-rival Andrey Rublev at the French Open to avenge last month defeat in the Hamburg final at the hands of Rublev.
The No. 5 seed Stefanos was down in the first set 5-3 with Rublev serving. He fought back to win four consecutive games to win the opening set.

The 22 year-old Greek tennis sensation becomes the first Greek tennis player to reach the semi-final of the French Open defeating Rublev in straights sets 7-5 6-2 6-3 to clinch the highly entertaining match.

The world No.6 who reached his first Grand Slam semi-final at the 2019 Australian Open where he lost to Rafael Nadal in straights sets, was excited with the result. He said after the game at a post – match conference,

“You cannot expect anything. I wasn’t expecting playing at the semi-finals of the Australian Open to start first. It’s a dream, of course, but I expected since a young age to potentially triumph at these Grand Slams.”

Tsitsipas who faces world No.1 Djokovic at the semi-final is of the strong believe that experience of playing at penultimate stage will be a boost ahead of the game.

“I’m happy that I’m able to be in the position where I am today. It’s very, very satisfying. I think I can learn from the previous one and I am chasing something spectacular” remarked Stefanos.

Meanwhile, Spaniard Rafael Nadal defeated Italian Jannick Sinner 7-6 (7/4) 6-4 6 1 to progress to the semi- final. He desires for a favourable result like the 2019 Australian Open semi-final where he defeated Tsitsipas in straight sets. He faces Argentine Diego Schwartzman in the French Open semi-final.