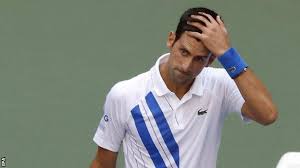 The disqualification of Western & Southern Open Champion Novak Djokovic has continue with mix reaction after being disqualified for striking a line judge with a ball during his match against Pablo Carreno Busta on Sunday.

The incident has led to the US Tennis Association issue a statement saying that Djokovic would lose all the ranking points earned from the event. He will also be fined 250,000 dollars I prize money for reaching the round four.

“In accordance with the Grand Slam rulebook, following his actions of intentionally hitting a ball dangerously or recklessly within the court or hitting a ball with negligent disregard of the consequences, the US Open tournament referee defaulted Novak Djokovic from the 2020 US Open.

“Because he defaulted, Djokovic will lose all ranking points earned at the US Open and will be fined the prize money won at the tournament in addition to any or all fine levied with respect to the offending incident” the statement said.

Djokovic opponent Pablo Carreno Busta expressed his shock over the incident, saying,
“I think this was not intentional,” the Spanish tennis player, told reporters. “I don”t think that anyone of us, the players, do this (intentionally).

“It’s just I broke the serve and he threw the ball. I think that it was bad luck, no? You cannot do this, but of course. I think that Novak never, never wants to hit the line umpire.

“I’m so sorry about that because it’s not the way that I want to be in (the) quarter-final.”
Zverev after his win in the fourth round said of the incident,
I’m a little bit in shock right now, to be honest.

“It’s very unfortunate that he hit the line judge, and especially where it hit her,” Zverev told reporters.

Tennis legend, Martina Navratilova, said” Unbelievable in the throat with a ball and the officials had no choice but to default. The 18- times Grand Slam singles champion wrote on twitter.

“Wow…#sad. Glad the woman is ok. We must do better than that”

Billie Jean King, tweeted, saying it was an unfortunate incident but that the rule was the rule.

“I hope the line judge is okay” the 12-times Grand Slam singles champion, wrote on twitter.

“The rule is the rule. It is unfortunate for everyone involved, but in this specific situation the default was the right call.”

With the default, Djokovic is disqualified from the tournament and more reactions are expected from commentators as the competition progress.

Meanwhile, Pablo Carreno Busta will face D. Shapovalov in the Quarter-Final of the US Open.