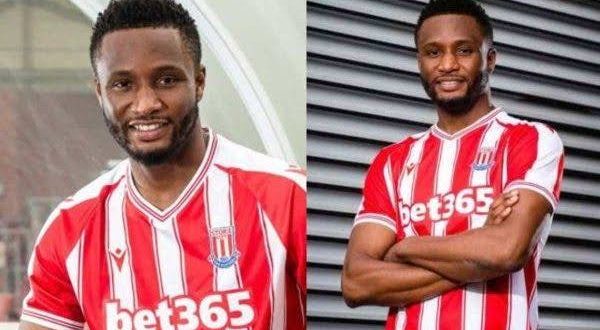 Former Nigeria international John Mikel Obi has joined Championship side Stoke City on a free transfer after leaving Trabzonspor earlier this year. He signs a one year deal.

The 33 year-old former Chelsea midfielder terminated his contract with the Super Lig side Tranbzonspor on mutual agreement over fear of Coronavrius. The Potters confirmed the new relationship with Mikel as a player with the announcement at the club’s Clayton Wood training ground, Monday.

Stoke manager Michael O’Neil said “We”re delighted to bring John to the club.
“His play career speaks for itself and underlines his caliber as a player.

“I was really impressed with him when we met for the first time and he outlined what he wants from the phase of his career.

“We spent four hours talking and he made it clear he wants to get back into the Premier League and finish his career there and hopefully he can do that with Stoke City.”

Meanwhile, he spent two years in China League after leaving Chelsea in 2017 and did have a stink with Middlesbrough in the Championship before joining Turkish club Trabzonspor, he left the club due to fear of Covid-19 in March with termination of his contract with the club on mutual agreement.

“I can bring that winning mentality into this team”
“There is always a way to win, we need to find that way. That mentality needs to come into the team. It”s all about winning in, week out and that”s something I’ve have done all my life at Chelsea.”

Mikel hopes to bring that experience and winning mentality to the team and that he said he will be happy. He won the African Cup of Nations with the Super Eagles of Nigeria in 2013 under late coach Stephen Keshi.