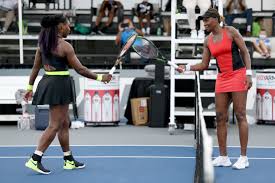 Williams Superstar sisters, Venus and Serena met at their 31st edition meeting as the younger, Serena recovered from a set down to defeat her sister Venus 3-6, 6-3, 6-4 in an intense contest to reach the quarter-finals of the Top Seed Open in Lexington, Kentucky.

Serena having won the Second Round against Benarda Pera, 4-6, 6-4, 6-1 and Venus defeating 39 year-old Victoria Azarenka in a straights set of 6-3, 6-3 to set up their both clash, which their meeting had head–to head, 18-12 advantage to Serena.

Venus was excellent in the first set calmly taking her game and exploring the weakness of her sister Serena, who played rusty and struggled in her first set against Benarda Pera before turning the remaining set to her advantage with an extra drive before winning.

This time Serena realized the game needs some calmness as she maintained control and avoided errors to win the second set 6-3, before rounding up the third set 6-4 to win their 31st meeting, and put their tie head-to head game to 19-12.

The Willaims superstar sisters first met at the age of 16 and 17 and have also faced each other four times at the Grand Slam Finals between 2002 and 2003.