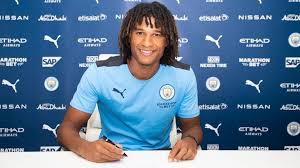 Manchester City have signed Netherland international Nathan Ake from Bournemouth in a deal worth £40 million .The deal which becomes a club record transfer from Bournemouth is a five year contract which keeps the former Chelsea defender at Etihad until 2025.

Bournemouth could receive a further £1 million add-ons for the Netherland international.

The 25 year-old former Chelsea defender has since completed his medical and have formerly signed for the Manchester side. Although, he started his career with London side Chelsea which had a buy back-option, the assumed fee for the player is considered to have scared the Frank Lampard led team.

Meanwhile, Manchester United pulled out of the deal having previously expressed interest on the Netherland international.

“Coming here is a dream for me. This is a top side full of world-class players. Everywhere you look in this squad there are big names with international pedigree. “Pep is a manager admired across the world-what he’s done in the game speaks for itself. The success he’s had is unbelievable and the style of football he plays really appeals to me. “I know I’m going to have to work hard to get into the side, but that’s what I’m here to do. I’ll do whatever I can to make an impact and help the team win silverware.”

Nathan Ake is expected to replace Vincent Kompany who many fans feel has created a vacuole in the central defense with his exit in 2019 at the Etihad.