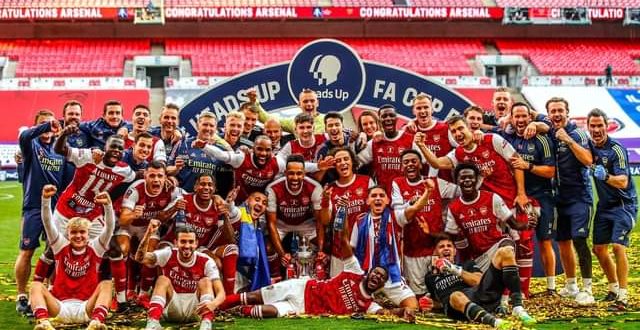 Gabon international Pierre-Emerick Aubameyang became a hero as he scored the winning goal against Chelsea in English FA Cup final. He gloriously lifts the ball into the net having displaced Chelsea defender Zuoma, to a record 14th FA Cup for Arsenal.

The young Arsenal coach Mikel Arteta brilliant execution of tactics saw the flaws of the Chelsea team exposed, especially at the back four which Cesar Azpilieneta, Jacob Zuoma were ordinary as they could not cope with the pace and exploits of the Arsenal attack.

Chelsea took the lead in the 6 minutes of the first half through American Christian Pulisic who was brilliant to watch in the game, beating Arsenal goalkeeper Eminialo Martinez.

The game took a different dimension with Azpilieneta and Pulisic injury which came as a blow to Chelsea team that was offensively approaching the game to their advantage.

Arsenal tactics became more exploiting with Gabon international Aubameyang becoming a lot more ambitious in the attack, with young Arsenal coach Mikel Arteta getting credit for his continuously instruction and input from the touchline.

Chelsea were reduced to ten men with the red card to Mateo Kovacic by referee Anthony Talyor, with Arsenal having equalised, Aubameyang scored another with brilliant display of calmness in front of goal beating Jacob Zuoma to lift the ball into the net.

Frank Lampard side looked ordinary with defense flaws, exposing the team to more danger ahead of their Champions League game against Bayern Munich. With obvious display of inexperience in defense Chelsea is likely to shop for more defenders soon.

Meanwhile, Arsenal’s goal winning scorer Pierre -Emerick Aubameyang is reported to have been offered a new two year deal to keep him at the club for their Europa games next season and future ambitions having won their 14 FA Cup in England,