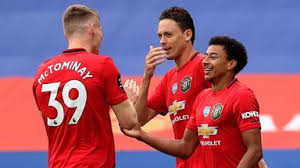 Manchester United and Chelsea secure a Champions League place in the final day of English Premier League in a dramatic fashion.

With Manchester United requiring a point on Sunday to qualify for the Champions League, the team delivered with a 2-1 victory against Leicester to finish third .

Chelsea won by same scoreline against Wolves to place fourth anf book a spot in the Champions League.

Watford, Aston Villa and Bournemouth were separated with three points and almost identical goal difference as they scrambles to avoid relegation. Norwish City had already been relegated before the final day matches and confirmed for the second tier English League, the Championship.

Villa’s point against West Ham was enough to keep them afloat as Watford went down with a first half goal by Arsenal.

Meanwhile, European Champions Liverpool had won the league, weeks before the final having secure enough points to win the 2019/2020 season.

Manchester City finished second to get a spot in Champions League, having won an appeal at the Court of Arbitration for Sports on alleged illegal transactions in signing rules.