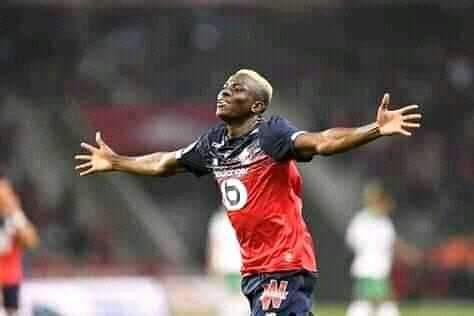 Nigerian striker Victor Osimhen has been named Best African Player Award winner in France. The young Nigeria international becomes the youngest –ever recipient of the Prix Marc Vivien-Foe, named in honour of former Cameroon player who died at the age 28 in 2003.

The Lille forward who netted 13 goals in the 2019-20 campaign, reportedly is currently in Nigeria following the death of his late father. He beats other African players led by Monaco’s Islam Slimani of Algeria, Nigerian Simon Moses of Nantes and Moroccan Yunis Abdelhamid who plays for Reims to clinch the award.

In an interview with Radio France International, he said ‘’It’s something I’ll treasure forever’’. ‘’I’m really proud to have this award with [Marc Vivieb Foe’s] name on it’’

The 21 year –old succeeds Arsenal’s Nicholas Pepe, who joined Arsenal last summer from Lllie. He has dedicated the award to his late father.

The top notch Nigerian striker who has caught the eyes of top clubs in Europe because of his performance in the French Ligue 1, finishing the season fourth with Lille, has continued to attract interest from Manchester United, Tottanham Hotspur, Chelsea and Napoli.

The young Nigerian who won the Golden Boot and the U17 World Cup with Nigeria in 2015, was voted Best African Player at the French top flight by panel of 100 journalist, according to event organisers Radio France Internationale and France 24.

He becomes second Nigerian to win the award after veteran Nigeria Goalkeeper Vincent Enyeama. Osimhen scored 18 goals in 38 appearances across all competitions and also won Lille’s player of the season.