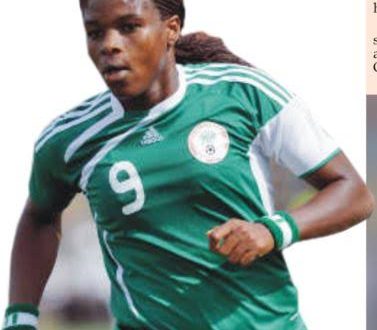 Nigeria international women football striker, Ugochi Desire Oparanozie has completed her football contract career with French side Guingamp FC upon the expiration of her contract in June 2020,

Desire Oparanozie who has expressed her delight and appreciation to the management, staff, players and fans of the club for the warm welcome, hospitality and good career experience during her stay with the club.

Oparanozie who becomes a free agent, is not ruling out the possibility of playing in the Nigeria Women Premier League having stared in the league before her professional career abroad.

Desire stated she is weighing her options on her next destination after parting way with her French club Guingamp, the club she joined six years ago.

The Super Falcons star and Nigeria Women Premier League winner, twice with Delta Queens in 2011 and 2012, began her football career with Bayelsa Queens, says she opted not to renew her contract with the Feminine Division 1 outfit as she needed to explore other avenues.

According to the 26 years -old top notch Nigeria Women striker, playing in the Nigeria Women Premier League ( NWPL) won’t be a big deal having won the championship twice with Delta Queens in 2011 and 2012.

“If there is need to come back to Nigeria to play in the women’s league, I will play. Nigeria’s league is tough and competitive, but the only issue is inadequate facilities,” she said on The Guardian.
.
“I started my football career in Nigerian league, so coming back home will not be a big deal for me.”

A four-time African Women’s Cup of Nations winner with Nigeria, Oparanozie also had spells with Rossiyanka, Wolfsburg and Atasehir Belediyespor in Europe.

She also has the Desire Oparanozie Foundation, a Non- Govermental Organisation that works to encourage young females to discover their talent and explore the opportunities of developing the choice and career to the benefits of the society and the individual