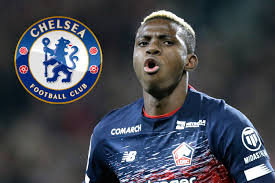 Chelsea have made a link move for Nigeria international Victor Osimhen, the report details that the 20-year-old is Frank Lampard summer major target as he look to boost his attack.

The Lille talisman has been a major target for some elite club in Europe , however, earlier in January Lille stated that the club expects the Nigeria stricker to stick with the club for the rest of the season to help his progress and that it would take a major offer to tempt the French outfit into selling their talisman in the January transfer window.

Victor Osimhen with his brilliant form in this season campaign had scored 12 goals in 23 matches in all competitions.

The Nigeria centre-forward powered in a header against Chelsea during this season’s Champions League group stage campaign, but the Blues did manage to edge Lille out by 2-1 scorelines both home and away.

Meanwhile Chelsea will battle some top club in Europe this summer such as Manchester United for the goalscoring Nigeria striker.