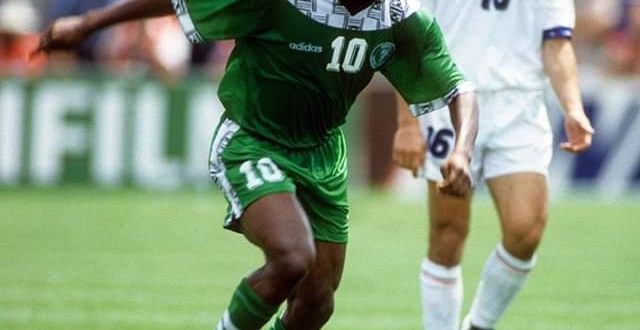 As the exposition and counter revelation on why Super Eagles of Nigeria lost their Round of 16 match against European giants, Italy in the 1994 FIFA World Cup in USA, another player who saw it all then, Emeka Ezeugo has blamed Austin Jay Jay Okocah for the loss, Bestchoicesports.com.ng can report.

Speaking with Brila FM recently, the former Rangers International FC of Enugu defender explained that Okocha had no business being in the pitch unless ‘we concede defeat before walking into the field. Football zealots of Nigeria have ripped me apart on social media but I know that they are football fanatics, emotional and sentimental wrecks with very little knowledge of football.

“He was never a starter in my generation’s team. He slowed our flow, you can’t give him the ball on transition moments and Nigerian Football fans don’t know a Jack about transition moments. He has zero Technical competence if you know what that means. No Nigerian knows this. You all see Football as purely an entertainment sport and never a business. The World has moved from entertainment to business football and you Nigerians are still missing Okocha putting the ball between the legs of an opponent while Denmark is beating Nigeria by 4 goals to 1.

“Nigerians are still talking about Okocha’s skills exhibition in 1998 World Cup match against Denmark irrespective of the fact that we lost by 4 goals to 1. No Nigerian knows why PSG went for Ronaldinho. If your intention is to win a match, starting the game with Okocha is as good as conceding defeat. He loses the ball 75 percent of the time that he engages in fruitless dribbling. No Nigerian football fan has detected the uniqueness of Lionel Messi, all you people see are the rarest spectacular moments and no Nigerian noticed that Messi never dribbles, I repeat, Messi never dribbles until he sets his foot in the attacking third which is about 45 yards from the opponent’s goal. i know that you don’t know why it’s like that.

“But Okocha would want to dribble from our own half and slow down the lightning speed and process of Counter Attack. Transition moments are a 7 to 10 seconds action. How many of you Nigerians are aware of The Fact that Zinedine Zidane is the most Technically Sound Footballer that have graced the Football field from 1997 to the present day?

“If Nigerians are asked to name such player everyone will say that it is Messi but Messi doesn’t even come close. Technical Ability is not Skills acquisition. Most Nigerians are not aware that whenever Barcelona has got their backs against the wall that they are defending with 9 players instead of 10 because Messi has no defensive attributes.

“Do you people remember Bayern Munich beating Barcelona black and blue in the Champions League by 7 goals to zero aggregate? Barcelona played with minus one player when they were defending and that minus one is Messi, your goat. Do you see any flaw in Messi’s game? That is because you are ignorant of what football’s technical side is all about. Have ever seen Okocha marking an opponent tight when his team is under great pressure?

“Modern Football is not about dribbling and showing off at the expense of the team’s ultimate goal. I played together with him in the same team, matter of fact, I mentored him and i always scolded him to learn to exhibit his techniques more instead of his skills. You all are spectators watching him from a distance. You can’t know him better than me. As a matter of fact, you know nothing about football. You are just a fan of the game. There’s a huge difference. Your Emotions and sentiments have gotten the better of you. You can’t know Football better than someone who played the game at the highest level.

“I talked to Brila FM reporter about Italy vs Nigeria match of 1994 World Cup and I mentioned that starting Okocha in that match was Westerhoff’s biggest blunder. You are playing a three time world champion in the knockout stage of the greatest show on earth and you are starting the game with Okocha? You must be outta your damn mind.

“Nigeria led in the match till one minute, 43 seconds left when they equalized and took the game to added or extra time.

“One very important thing that all Nigerian emotional and sentimental wrecks are not aware of and never remembered or considered was that in the 75th minute of the game Zola was sent off.

Should the game not be a done deal? Even republic of Benin would have sealed the game right there. It was a game that should have been won long ago.

“Italy were playing with only 10 men yet they put Nigeria under pressure, our backs against the wall, as though we had one man ejected from the game. But little did my countrymen/Nigerians know that we were actually playing without 2 men because Italy pressed us till the final whistle instead of the opposite. Rashidi Yekini was not marking and Okocha contributed zero effort when the Italians had possession of the ball. If you watched that match you would know that they had trice more possession than Nigeria and constantly placed us under pressure. Super Eagles 2 battlefield Leaders were languishing on the bench.

“Nigerians are content with a player that puts the ball between the legs of an opponent, dribbles and loses the ball, they don’t care about the consequences of the possession lost and in case of Okocha, he will be standing and watching, standing and smiling, laughing or bent low in one spot stationary while the opponents will exploit the transition moment that was Okocha’s gift to them.

Nigerians can tell their kid’s teacher that she doesn’t know how to teach yet they can’t even help their children with their homework,”

“Going forward, Okocha slows the team’s attacking flow. super eagles attacking prowess was never built around Okocha’s game like Barcelona built their game around Messi. 1994 super Eagles game was all teamwork. Okocha’s football compliments not teamwork. None of you fans of Okocha would understand a Jack about what I’m saying. Westerhoff was focused on marketing 97% of the team that he was their manager and he succeeded in making millions of dollars from the transfers of almost the whole players of the 1994 World Cup team. That was all that mattered to the Dutch delight,” Ezugo said