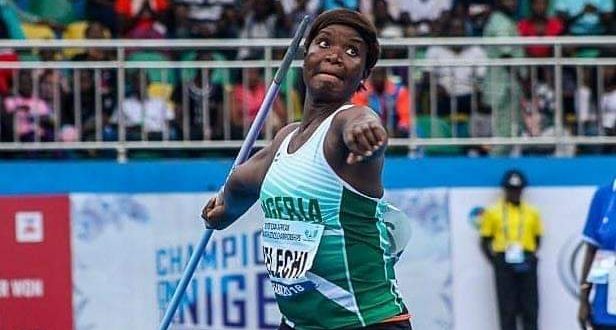 Kelechi Nwanaga is a Nigerian javelin thrower and a student-athlete at Florida State University.

Kelechi made her debut international appearance at the 2015 African Junior Championships where she won the silver medal and a few months later at the All African Games in Congo Brazzaville, she won the Gold.

At the 2016 African Senior Athletics Championships in South Africa she finished just outside medal table in 4th with a distance of 53.45m. During the Ozoro Grand Prix in 2017, Kelechi shattered the National Record with a distance of 58.15m breaking the former Nigerian record of 55.30m set by Sorochukwu Ihuefo in 2002 at the African Championships in Tunis where she finished 2nd.

In front of home crowd in Asaba, the very talented thrower threw a distance of 56.96m to clinch the Gold medal at the 2018 African Championships and she carried that momentum to the 2019 African Games where she stamped her feet once again as the Africa’s best.

Nwanaga has really risen to the apex not just in Nigeria but Africa in the last 4 years, being the National champion four times in a row and also winning back-to-back African titles. She is indeed an athlete who we believe will raise the Nigerian flag to the highest level.