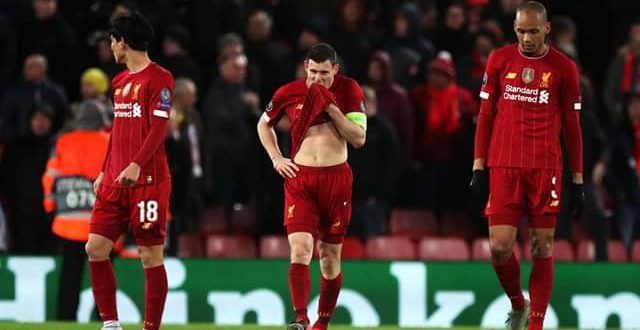 Liverpool suffered a 2-3 defeat by Athletico Madrid to end title defense in the UEFA Champions League and first time at the last 16 stage since 2006 at Anfield. The Spanish side had won the first leg 1-0 before the dramatic knockout, thanks to two goals by Marco Llorente in extra time and another by former Chelsea forward Alvaro Morata to progress 4-2, on aggregate in the round of 16.

The win at Anfield with full capacity was built on stamina, determination and nous which was a description of the visitor’s tactics and tenacity. This Jurgen Klopp consider as frustrating and not ‘proper football’

‘’ For the score to go 2-1 was not cool, it was a blow but it’s not a big problem. The second goal was a bigger problem’’ the Liverpool manager told BT Sport.

‘’ After the second goal the legs were a bit tired. Everything that looked really natural in the first 90 minutes became a bit stiff. The crosses did not have the same quality. We wanted the first time crosses like for first goal, which was brilliant and the boys forget to do that.

‘’I am completely happy with the performance. It’s so difficult to play a side like this.

‘’ I don’t understand with the quality they have the football they play. They could play proper football but they stand deep and have counter attacks.

‘’ We accept it of course but it doesn’t feel right tonight. I realise I am a really loser, especially when the boys put such an effort in against world class players on the other side who defend with two rows of four’’

It’s difficult to explain these goals, to be honest. The boys fought hard’’

The Liverpool manager, Jurgen Klopp expresses his strong believe that his team will be back, however, they are out of the tournament which the crown will not return to Anfield. But have the English Premier League title waiting which Liverpool will win by next week for the first time in 30 years with two wins.