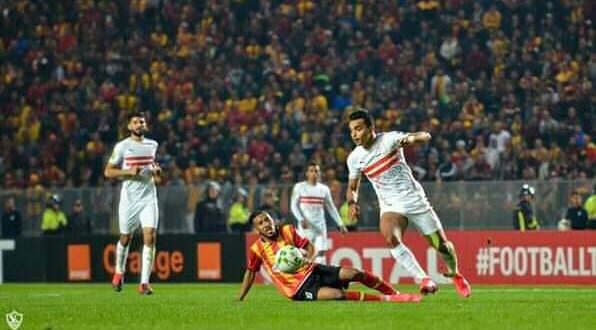 Confederation of African Football Champions League defending champion, Esperance Sportive des Tunis will not be reclaiming the CAF Champions League for the third consecutive time as they were eliminated at the Quarter-final stage by Egyptian giants Zamalek SC on Friday night.

Esperance went into the match looking to overturn the 3-1 deficit acrude in the first leg away in Cairo at the hands of the White Knights just two after two sides squared off in the CAF Super Cup in which the Egyptians also defeated Moine Chabaani’s 3-0 to claim the title.

The Tunisians were a depleted side as they were missing coach Moine Chabaani and his assistant Majdi Traoui as well as key players Abdelraouf Benguit and Khalil Chamam who were suspended for unruly behaviour potrayed in the aftermath of first leg defeat.

However, with only four minutes played into the match at the Stade Olympique des Rades, the hosts were handed lifeline as Pharaohs defender Mahmoud Alaa handled in the area with the referee not hesitant to point to the spot and Bilel Bensaha made no mistake as he calmly converted to send his side in the lead and needing just one more goal to overturn the tie.

Esperance continued their dominance in the encounter but could not find the whole important goal as Patrice Cateron’s charges stood firm to become the first club to book their place in the last four with a 3-2 aggregate scoreline.