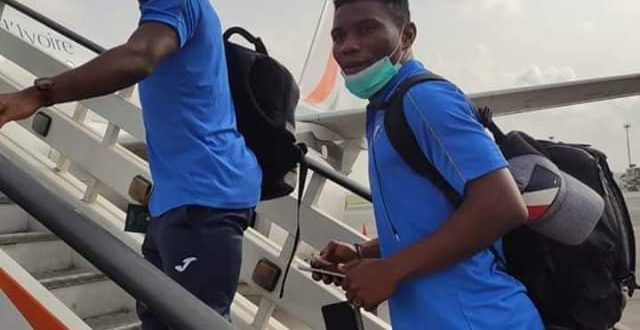 The Peoples Elephant of Aba who were held to 1-1 by Horoya in CAF Confederations Cup at home ground after failing to take a first-leg advantage, However, Enyimba Head Coach, Fatai Osho, as well as players Austin Oladapo and Stanley Okorom, has remained optimistic about the team’s chances of overcoming Horoya in Conakry to qualify for the semifinal of the CAF Confederation Cup.

Horoya, who now hold an advantage heading into the return fixture of the last eight tie at the Stade du 28 Septembre will fight to keep advantage of the away goal it secured in Nigeria

The People’s Elephant must avoid defeat and score to remain in the competition and stand the chance of becoming the first Nigerian team to claim the title.

The Enyimba gaffer Osho is, however, drawing confidence. He said,

“We stand a very good chance like I said earlier. The last time we were on an away ground we scored five goals and you want to look at that team and believe they can do it anywhere.

“This is a CAF competition where you have superb officiating, so there is absolutely nothing to worry about. We still fancy our chances. I know they would like to come at us. We would be ready to really give a fight.

“We just want to see how many of those players will be hundred percent because we are now thinking of taking players who are hundred percent to that particular match so that they can play to their potentials.”

Austine Oladapo added, “What happened at home wasn’t the best result for us, we know that.

“I think where we missed it in the first match was the way we played. We lost our playing pattern and allowed the opponents to come hard on us. If we want to play on Sunday in their home in Conakry, we have to stick to our pattern.

“The game is still open for everyone. We are good at away. If you look at our away history, we are very rich.”

Stanley Okorom strong believe that additional effort will give Enyimba chance of qualifying , he said,

“The few days we trained we know that the team spirit is very high. There is no panic.

Sunday’s fixture in Conakry will represent the second time Enyimba would be away to Guinean opponents, with the previous encounter being a 5-2 comeback win against Satellite FC in the 2003 CAF Champions League.

Nigeria’s League reigning Champion Enyimba will fight to score goals to stand a chance qualifying in Conakry. Kickoff time for the game is 4 pm local time, which is 5 pm in Nigeria.