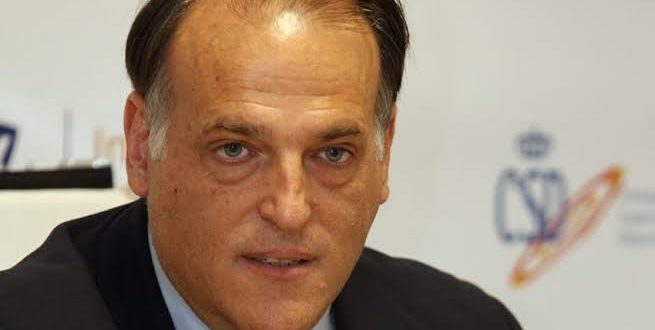 Javier Tebas La Liga President has thrown his support for UEFA decision to ban Manchester City for two years from the Champions League. The Premier League reigning Champion has been fined £24.9million after being found guilty of committing “serious breaches of the UEFA Club Licensing and Financial Fair Play Regulations”

Although Manchester City has announced they will appeal the verdict at The Court Arbitration for Sports, but Tebas, who has long spoken out against the big spending of City and Paris-Saint Germain, felt the punishment was long overdue.

“UEFA is finally taking decisive action,” Tebas wrote on Twitter .
“Enforcing the rules of financial fair play and punishing financial doping is essential for the future of football.
“For years we have been calling for severe action against Manchester City and Paris Saint Germain.
“We finally have a good example of action and hope to see more.
“Better late than never.”
Commenting on the ban, former City forward Rodney Marsh reckons the ban could lead to owner Sheikh Mansour leaving the club.
Marsh tweeted: “If this decision is upheld it would not surprise me to see owner Sheikh Mansour sell the club.
“He has been superb for City and this is a huge kick in the balls… I wouldn’t blame him.”

Meanwhile, former City midfielder Michael Brown felt City’s Abu Dhabi-based owners would not be daunted by the ban.
“What they’ve done as a football club, what they’ve done on the pitch, the way they’ve gone about it, I think they’ve been first class,” Brown told Five Live.
“They’ve been honourable how they’ve gone about it, as usual like Manchester City. This will be a shock for them but it will be something that they’ll come out fighting.
“The owners aren’t here for the short term, they will take it on. If any owners will take this adversity,