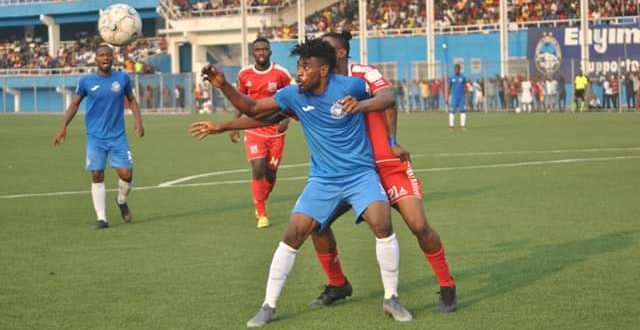 Enyimba Foootball Club of Aba lost 2-0 to Heartland of Owerri at the Enyimba Stadium on Wednesday. In a match that Stanley Dimgba missed a penalty in the first half.

The home team appeared to have found the breakthrough in the 27th minute when Reuben Bala was tripped in the box for a penalty, but Dimgba’s kick was pushed away by Ikechukwu Ezenwa, who was making his first return to the Enyimba Stadium since his loan spell two years ago.

That proved to be the turning point of the game as the visitors broke from the right three minutes later, with Abubakar Sadiq dribbling past his marker to fire into Stanley Nwabali’s farpost.

The hosts responded with a barrage of attacks – Victor Mbaoma coming close from range before Nelson Ogbonnaya’s header was cleared off the line.

But against the tide, the visitors insured their lead right before the break when loaned forward Chukwuemeka Obioma ran through the Enyimba backline to score against his parent club.

The People’s Elephant coach Fatai Osho introduced Martins Usule and Chukwuka Onuwa in the second half but indecisive finishing, coupled with a disciplined defensive performance by Heartland, kept Enyimba out from scoring.

The result has left Enyimba with a tally of fifteen points from their opening eleven matches of the season.

The People’s Elephant will play an away game against FC Ifeanyi Uba in their next fixture at the commercial town of Nnewi, Sunday.