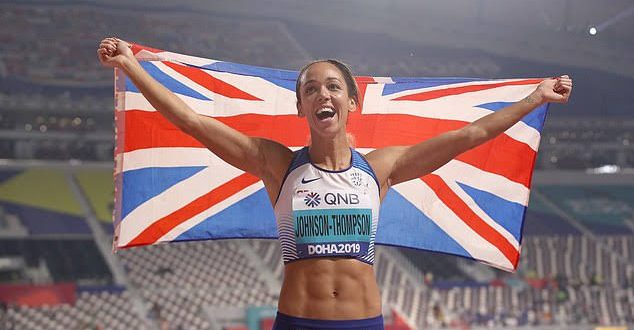 By putting seven exceptional displays together for the first time, the British star secured her status as a world champion in Doha.

And with less than 300 days to go until the Tokyo 2020 Olympics, it was first blood to the Liverpool athlete in her high-class heptathlon battle with Nafi Thiam.At 12.18am local time, Johnson-Thompson posted a British record score of 6,981 to win the women’s heptathlon at the IAAF World Athletics Championships.

It was a total that smashed the Super Saturday mark of 6,955 set by the nation’s darling Jessica Ennis-Hill, who watched amazed from the nearby BBC TV studios.

Johnson-Thompson is the EIGHTH British woman to win an athletics world title, this one coming just 24 hours days after Dina Asher-Smith stormed to 200m victory.

Distraught Thiam, the Olympic champion and defending world champion, was crestfallen after the javelin following an injury.

The Belgian finished 304 points behind in second place – her first defeat in a heptathlon since May 2016. Verena Preiner of Austria took the bronze medal.

In a sport where the margins are so tight, there were concerns the 26-year-old Brit would always fall short in the global arena.

A year later in Rio, she dropped out of the Olympic medals following the penultimate event, the javelin.

And at London 2017, the home favourite was once again let down by a poor javelin showing.

Yet she managed to banish all those nightmares in the best way imaginable – a deserved gold medal and pride of place at the top of the GB standings.

KJT, who trains in France, had the overnight lead by 283 points and it was expected she would face a proper ding-dong with the Belgian rival.

In the long jump, the Scouser jumped 6.77m while Thiam responded with a leap of 6.40m.

It was in the javelin where Thiam was expected to make up the ground and if it went to form, perhaps overtake the British rival.

Yet Kat’s throw was enormous by her stands – a personal best of 43.93m – to deliver a statement of intent that she meant business.

Thiam had one successful attempt at the javelin and then out of nowhere, she walked off, zipped up her tracksuit and went off prematurely for treatment.

It appears her old right elbow injury had resurfaced and ended her competition, her arm heavily bandaged by the end.

Unless Kat fell over in the 800m, one of her preferred events, the gold was essentially in her hands.

And it was almost a processional two laps around the track as she cemented her place in the British history books alongside compatriot Asher-Smith.

Elsewhere, Laura Muir qualified for Saturday’s 1500m final in a time of 4:01.05. Sarah McDonald was sixth in her semi-final and misses out.